Over the past three years I have made some extraordinary acquaintances, most notably Ludwig van Beethoven, Felix Mendelssohn, and Fanny Mendelssohn Hensel. Now I am starting to make the acquaintances of Robert and Clara Schumann, and as I do so, I am confirmed in my opinion that the best way--perhaps the only way--to learn about an artist is through reading his (or her) letters.
Biographies are for the most part defamatory and slanderous, but even when they are written without slander, they do little more than present a series of facts about the artist. If they are not written to “deconstruct” and slander the artist, then they are written objectively, to examine him under a microscope. But objective writing cannot introduce you to a person. 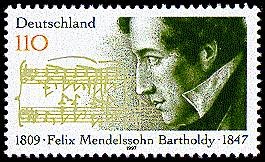 I first ventured into this world by way of Felix Mendelssohn's Reisebriefe. One of the first was a letter in which Mendelssohn described to his family his visit with Goethe at Goethe's home in Weimar. It is the closest we can come to actually being in Goethe's parlour with Mendelssohn playing the piano. After playing the old poet many pieces pieces by Bach (Goethe loved the music of Bach) and Mozart, Felix (it is almost impossible to read his letters without coming to be on a first name basis with him) said to his elderly friend, "Now I will play you some Beethoven," but Goethe said that he did not wish to hear any Beethoven. "I'm sorry," replied the young composer, "but I can't help it!" and then he launched into a piano reduction of Beethoven's fifth symphony. Goethe listened to the music, and then said, "That was splendid, but if all the musicians were here playing it together, wouldn't the house fall in?"

Throughout the course of Felix's letters, his recipients become as interesting as himself. His father, Abraham Mendelssohn, who did not know the strength of his own personality, and who constantly underestimated his own intellectual abilities; his mother Lea Mendelssohn, the great lover of literature and languages, whose favorite play was Der Sturm, that is Shakespeare's The Tempest, and who had been the primary teacher of Felix and his siblings; his younger, fun-loving, Greek reading sister Rebecka; his shy, cello-playing younger brother Paul; and most of all, his beloved sister Fanny, the queen of German chamber music. 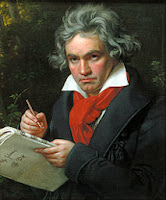 I then moved further back in time, and approached the letters of Beethoven with great trepidation, trepidation which would not have been there had it not been for slanderous rumors, not expecting to find a perfect person, but hoping to find an honorable man, but fearing lest one of my favorite composers should turn out to have been a horrible person. I found a flawed, but honorable man, possessed of characteristics which I should have anticipated, having listened to his music over and over, namely a sense of humor (he was fond of very silly puns), an inability to lie (a trait which he shares with my own brother), a genuine esteem for all good women (his letters are filled with excellent women who took compassion on him), a love of nature, and, despite very poor catechises, a love of nature's God.-

One of the most moving accounts of Beethoven I first encountered through Mendelssohn's Reisebriefe. When Felix was in Milan, he met an elderly Austrian noble couple, a general and his wife, who had known Beethoven. When they found out that Felix was a young composer, they invited him to their lodgings, and the wife, Baroness Dorothea von Erntemann, began to play for him on the piano. He asked her if she would play him one of Beethoven's pieces, and she took out a sonata and began to play for him. Felix glanced over at the old general, and saw tears in his eyes. "It has been ten years," explained the old general, "since anyone has asked my wife to play any of Beethoven's music." Then the wife told him about a time when she and her husband had a child who died. When Beethoven heard about the death of their child, he came to offer his condolences, and when he entered the house, he said, "I will speak to you in music," and he asked her to sit beside him at the piano, and he began to play, and then she began to play, and they played back and forth to one another. Later I read that the Baroness von Erntemann had not been able to express her grief prior to Beethoven's visit. 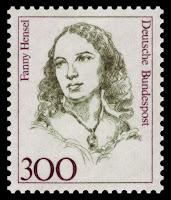 Continuing in the time of the Mendelssohns, I went on to read the second half of Die Familie Mendelssohn, which is a two volume collection of letters and diary entries of the various Mendelssohns, beginning with Felix and Fanny's grandfather Moses Mendelssohn (during his lifetime he was Germany's most beloved and revered philosopher) and ending with the last, and very painful (so painful that I have great difficulty reading them), letters of Felix, in the six months between Fanny's sudden death and his own, and a brief account of what happened to the loved ones that the two siblings left behind. The collection was put together by Fanny's son Sebastian Hensel, and includes many of her letters. Once again there is a sense of being there, of having been in the concert hall when Felix conducted his complete Mitsommarnachtstraum for the first time, or when he lead religious music, including his magnificent setting of Psalm 114 (the Exodus Psalm), at the Cathedral, and Fanny, who had gotten all the relatives, Christians and Orthodox Jews, to come, was embarrassed by a very bad homily from the rector. Or present in Fanny's garden at one of her "private" concerts, or in her house with her family, Felix and his wife Cecile and all the "Felicianer" ("Felicians), Fanny's name for Felix and his family.

I was afraid to approach the Schumanns at first, just as I had been with Beethoven, for there are altogether too many nasty rumors about both Robert and Clara Schumann. I found two loving, and very upright people. I found that, in spite of Robert's terrible mental illness, they were both people of great faith in God. They were also, to my delight, lovers of the Mendelssohns, whom they knew personally. Who knew that Schumann threw Lizst out of his house once, for insulting Felix Mendelssohn? And then there was their family. Who knew that Clara had to put her musical skills to use on her children, particularly their first born, Marie (or Mariechen), who would only go to sleep if she played them adagios? 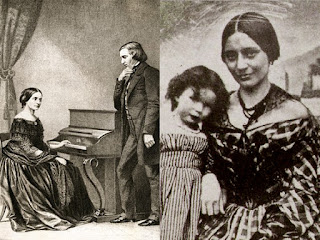 I found a great deal of sorrow in their letters and diaries, because of Robert's illness, but also joyful moments.Imagine being in the room when the great Romantic poet Joseph von Eichendorff first heard Schumann's settings of his poems. Imagine the poet there, with his wife and children, listening to his poems set to music for the first time, with Clara Schumann at the piano, and her dear friend Jenny Lind singing, and the composer standing near at hand.

The pain that came in the final days before Robert had to be committed (voluntarily) to an asylum is almost unbearable. It was as though I was with Clara in those last hours.

I saw with Robert Schumann a kind of man, genuinely sensitive and thoroughly a man, who is not permitted to exist in our world. Perhaps that is something I saw with all of these friends. Perhaps this is why they are so often misunderstood. 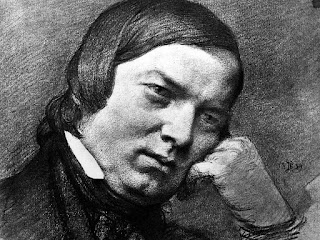 I have been privileged to make the acquaintance of many of my favorite artists--Beethoven, Felix Mendelssohn, Fanny Hensel, and now Robert and Clara Schumann--through their own letters and writings. Their faults, which, being members of our fallen race, they had, pale in comparison to their great capacity for love, their loyalty, their generosity, their nobility, and their great personal faith in the God who redeems us and washes away our iniquities and leaves what is good and true. It is impossible to come to know these people without coming to love them. I am honored to have made their acquaintance in the only manner possible on this side of eternity: through their own words, their diaries, their letters.
Posted by Clara Schwartz at 9:07 PM

Glory be to God for dappled things--
For skies of couple-colour as a brinded cow;
For rose-moles all in stipple upon trout that swim;
Fresh-firecoal chestnut-falls; finches' wings
Landscape plotted and pieced--fold, fallow, and plough;
And all trades, their gear and tackle and trim.

All things counter, original, spare, strange;
Whatever is fickle, freckled (who knows how?)
With swift, slow, sweet, sour, adazzle, dim;
He fathers-forth whose beauty is past change:
Praise Him. 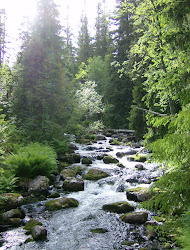 Clara Schwartz
Clara Schwartz is a young Roman Catholic with strong Protestant heritage who believes very firmly in ecumenism between orthodox Christians of all denominations, as well as ecumenism between Christians and believing Jews. Her cultural backround is mostly German. She has a BA in German and Humanities from a small Catholic college. She is interested in literature and music.